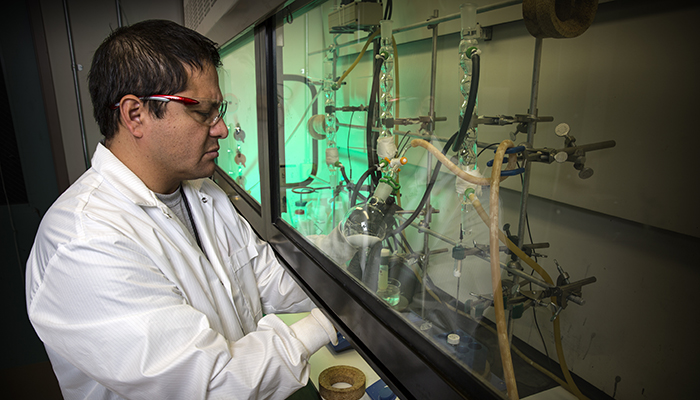 A significant challenge for researchers developing nerve-agent antidotes is creating a drug that simultaneously protects both biological systems. Such a drug must be able to cross the semipermeable, protective blood–brain barrier, which separates the brain’s blood supply from the CNS extracellular fluid. In a government-funded effort, scientists at Lawrence Livermore’s Forensic Science Center and Biosecurity Center have formulated molecule LLNL-02, the first molecule capable of this dual protection. 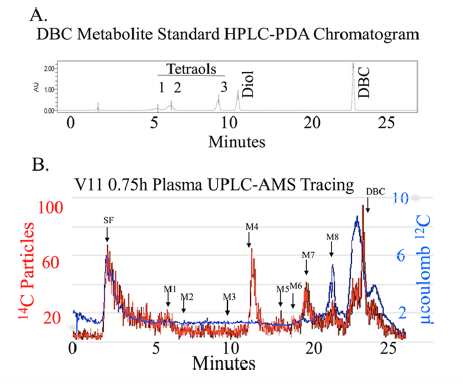 Metabolism is a key health risk factor for exposures to pro-carcinogenic polycyclic aromatic hydrocarbons (PAHs) such as dibenzo[def,p]chrysene (DBC), an IARC classified 2A probable human carcinogen. Although human exposure to PAHs occurs primarily from the diet in non-smokers, little data is available on the metabolism and pharmacokinetics in humans of high molecular weight PAHs (≥4 aromatic rings), including DBC. We previously determined the pharmacokinetics of DBC in human volunteers orally administered a micro-dose (29 ng; 5 nCi) of [14C]-DBC by accelerator mass spectrometry (AMS) analysis of total [14C] in plasma and urine. In the current study, we utilized a novel “moving wire” interface between ultra-performance liquid chromatography (UPLC) and the AMS to detect and quantify parent DBC and its major metabolites. The major [14C] product identified in plasma was unmetabolized [14C]-DBC itself, (Cmax= 18.5 ± 15.9 fg/mL, Tmax= 2.1 ± 1.0 h), whereas the major metabolite was identified as [14C]-(+/-)-DBC-11,12-diol (Cmax= 2.5  ± 1.3 fg/mL, Tmax= 1.8 h). Several minor species of [14C]-DBC metabolites were also detected for which no reference standards were available. Deconjugated and conjugated metabolites were detected in urine with [14C]-(+/-)-DBC-tetraol identified as the major metabolite, 88.7% of which was detected upon enzymatic deconjugation (Cmax= 35.8 ± 23.0 pg/pool, Tmax= 6-12 h pool). [14C]-DBC-11,12-diol, of which 94.4% was conjugated and identified in urine (Cmax= 29.4  ± 11.6 pg/pool, Tmax= 6-12 h pool). Parent [14C]-DBC was not detected in the urine. This is the first dataset to assess metabolite profiles and associated pharmacokinetics of a carcinogenic PAH in human volunteers at an environmentally relevant dose, providing the data necessary for translation of high dose laboratory animal models to human translation for environmental health risk assessment.

Resveratrol is widely promoted as a potential cancer chemopreventive agent, but a lack of information on the optimal dose prohibits rationally designed trials to assess efficacy. To challenge the assumption that “more is better,” we compared the pharmacokinetics and activity of a dietary dose with an intake 200 times higher. The dose-response relationship for concentrations generated and the metabolite profile of [14C]-resveratrol in colorectal tissue of cancer patients helped us to define clinically achievable levels. In ApcMin mice (a model of colorectal carcinogenesis) that received a high-fat diet, the low resveratrol dose suppressed intestinal adenoma development more potently than did the higher dose. Efficacy correlated with activation of adenosine monophosphate-activated protein kinase (AMPK) and increased expression of the senescence marker p21. Nonlinear dose responses were observed for AMPK and mechanistic target of rapamycin (mTOR) signaling in mouse adenoma cells, culminating in autophagy and senescence. In human colorectal tissues exposed to low dietary concentrations of resveratrol ex vivo, we measured enhanced AMPK phosphorylation and autophagy. The expression of the cytoprotective NAD(P)H dehydrogenase, quinone 1 (NQO1) enzyme was also increased in tissues from cancer patients participating in our [14C]-resveratrol trial. These findings warrant a revision of developmental strategies for diet-derived agents designed to achieve cancer chemoprevention. 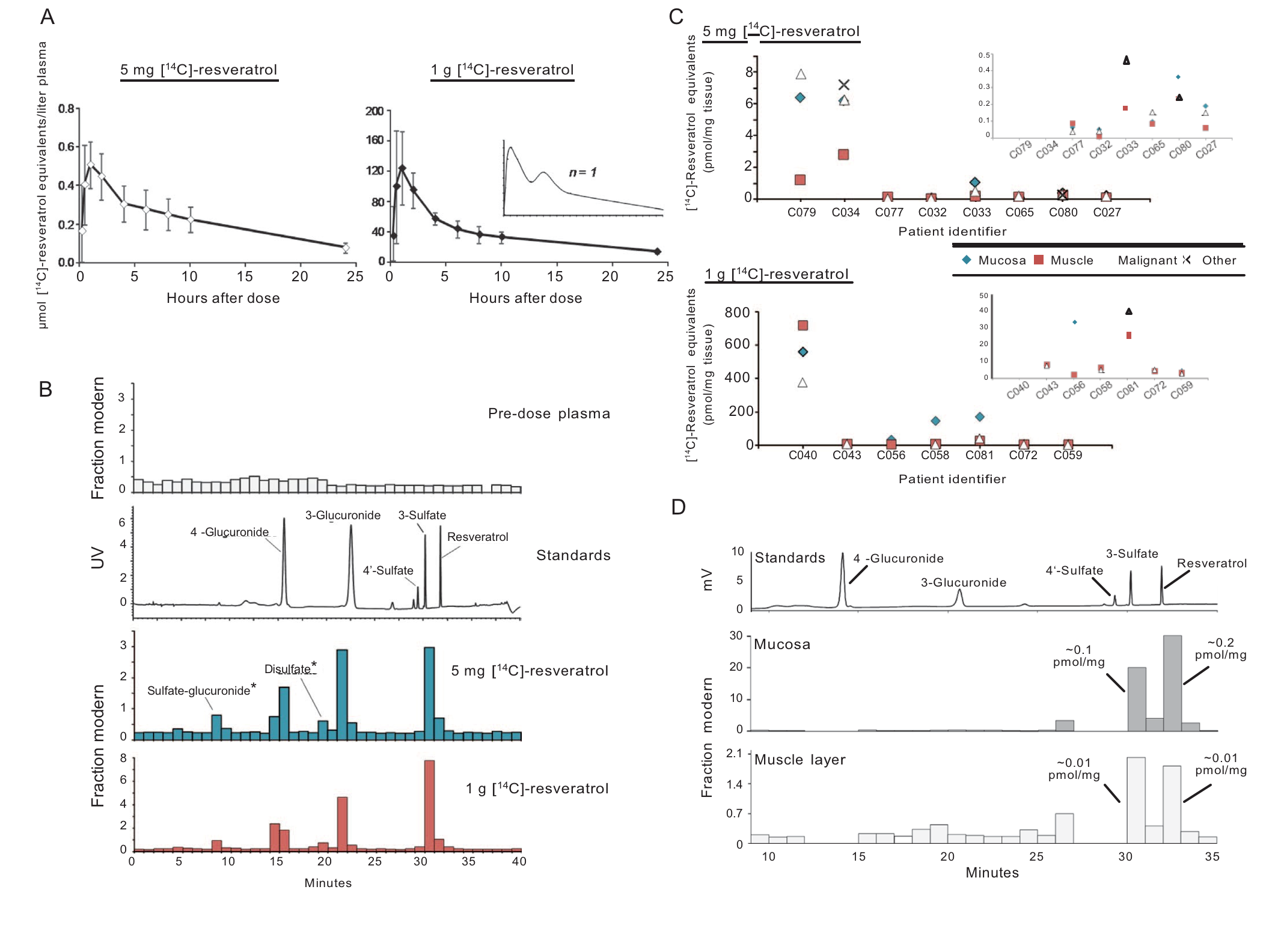 Quantitation of resveratrol and its metabolites in humans after a low dietarily achievable dose or high pharmacological dose. (A and B) Healthy volunteers received a single [14C]-labeled oral dose of either 5 mg or 1.005 g resveratrol (44.5 kBq, 0.962 mSv), and plasma samples were taken over 24 hours for determination of total [14C]-resveratrol equivalents by AMS analysis. (A) Graphs show average (±SD) concentrations for 10 volunteers per group, whereas the inset represents a single participant to illustrate the second peak maximum commonly observed with resveratrol due to enterohepatic recirculation. (B) Plasma metabolite profiles determined by HPLC-AMS analysis of selected samples from one patient on each resveratrol dose, taken 1 hour after ingestion. Also included are a pre-dose plasma sample for determination of background levels of radio-carbon and an ultraviolet (UV) chromatogram from the analysis of authentic metabolite standards. Peaks designated by * were tentatively assigned on the basis of their chromatographic properties because synthetic standards were not available. (C) Levels of [14C]-resveratrol equivalents in tissues of patients with colorectal cancer that received either 5 mg (n = 8) or 1 g (n = 7) resveratrol daily for 1 week before surgery. Enlargements are included as insets to enable comparisons at lower concentrations. (D) Metabolite profile in colorectal mucosa and muscle tissue of a patient that received 5 mg of [14C]-resveratrol, determined by HPLC-AMS analysis. Peaks of radiocarbon in both tissue types correspond to resveratrol and its 3-sulfate metabolite, on the basis of the similarity of retention times to authentic standards, and the concentrations stated translate to micromolar, assuming that 1 g of tissue equates to 1 ml.

Atmospheric testing of nuclear weapons produced a 14C-bomb pulse that labeled the biosphere. Precise measurement of 14C/C in biological macromolecules enables direct determination of molecular or cellular age or turnover. We measured the age of structural proteins of cerebral aneurysms (CA) in humans by measuring the concentration of nuclear bomb test-derived 14C in purified collagen. Nearly all CA samples contained collagen type I, which was <5 years old, irrespective of patient age, aneurysm size, morphology, or rupture status. The CAs from patients with a history of risk factors (smoking or hypertension) contained significantly younger collagen than CAs from patients with no risk factors (mean, 1.6±1.2 versus 3.9±3.3 years, respectively; P=0.012). The abundant and relatively young collagen type I in CAs suggests that there is an ongoing collagen remodeling in aneurysms, which is significantly more rapid in patients with risk factors. 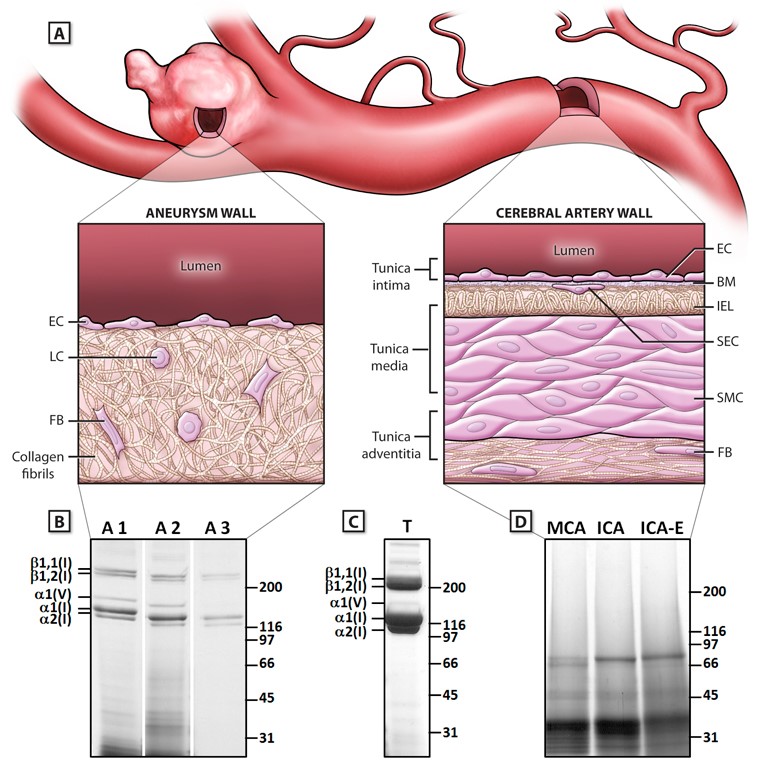 (A) Schematic illustration of the structural composition of a cerebral aneurysm and the parent cerebral artery. The aneurysm wall contains collagen type I fibrils as the dominant structural component, with loss of the typical arterial wall features. (B) Electrophoretic mobility of 3 pepsin-digested aneurysm samples analyzed on SDS-PAGE Gels. The predominant bands represent α bands of collagen type I. (C) Collagen type I amount and purity in aneurysm and artery samples were compared with collagens from mouse tail tendons. (D), Cadaveric cerebral analyzed under the same procedures as CAs. One representative set is shown without any bands for collagen type I and V. (ICA, internal carotid artery; ICA-E, extracranial ICA; MCA, middle cerebral artery).