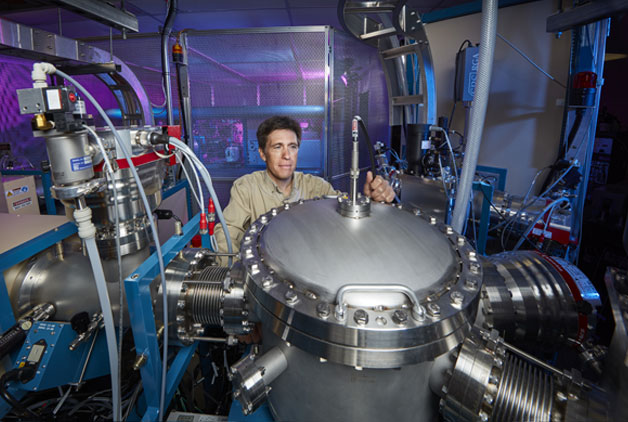 AMS is an important tool for addressing many complex biomedical science problems. It is a technique which measures isotope ratios with high selectivity, sensitivity, and precision. In general, AMS separates a rare radioisotope from stable isotopes and molecular ions of the same mass using a variety of standard nuclear physics techniques. In the case of carbon, 14C ions are separated and counted as particles relative to 13C or 12C, which are measured as an electrical current. Around 1% of the 14C in a sample is counted which is 1000-times more efficient than decay counting. Sensitivities approaching 14C/C of ~ 2 x 10-15 or 10 attomoles of 14C can be achieved in mg sized samples.

Our User Resource is presently the only one of its kind in the country for biomedical AMS. The most significant work enabled by AMS is likely to be quantification of metabolic pathways in human health states and comparison to ex vivo and in vivo animal models. We believe this technology can enable a deeper understanding of the etiology of human health concerns by: 1) enabling the quantification of pharmacokinetics and other molecular endpoints directly in humans, 2) offering the ability to conduct quantitative studies using biologics such as proteins or lipids, thereby reducing the amount of radioisotope usage in biomedical labs, and 3) enabling more relevant studies of metabolic pathways in health and disease through the use of much lower, more biologically relevant concentrations of metabolic substrates in cells and intact organisms. These studies are already underway in the fields of toxicology, pharmacology, immunology, cell biology, cancer biology, and systems biology.

The key steps of AMS allowing quantitative and specific measurement of isotopes are: 1) the production of negative ions from the sample to be analyzed, 2) a disassociation step, to destroy any interfering molecular isobars (primarily 13CH-), and 3) the use of high energies, which allow for the identification of ions with high selectivity.

14C-AMS analysis requires samples be converted to a form that retains the isotopic ratio from the original sample and that provides chemical and physical equivalence for all carbon atoms. Historically, samples for 14C-AMS analysis have been first combusted to produce CO2, followed by a catalytic reduction to form graphite. These samples are bombarded by a Cs+ beam forming negative elemental or molecular ions. The production of negative ions removes the primary isobaric interference for radiocarbon, 14N, because nitrogen does not form a stable negative ion.

Ions are subsequently selected at single atomic mass units through a low energy magnetic analyzer by switching the electrostatic potential on the magnets vacuum chamber. 12C is separated from mass 13 and 14 ions and can be quantified in a Faraday cup.

This low energy mass spectrometer cannot resolve the small differences among the rare isotope and the nuclear and molecular isobars. Hence negative ions and molecules are accelerated to at least a few hundred keV energies (Figure 1 shows a schematic diagram of our 250 kV Single Stage AMS (SSAMS) system).

At the end of this acceleration stage, these ions pass through a molecular dissociator, or electron stripper. Molecular ions, such as 13CH are dissociated in collisions with the atoms in the stripper gas that also removes one or more electrons from the residual atomic ions. The 14C+ ions are further accelerated followed by momentum and energy analysis before being counted using standard particle detectors. 13C+ ions are measured as an ion current in a Faraday cup following the fragment analysis magnet.